Our engineers have gone to AWS re:Invent for many years now — but this year felt different. People in our industry have always paid attention to new AWS services, but as Amazon continues to leap ahead of major technology shifts and launch national conversations about things like IoT and analytics, this year’s re:Invent announcements are rippling out across a far wider business audience.

In terms of sheer numbers, this was the biggest re:Invent ever. More people, more breakout sessions, and Amazon’s biggest customer showcases yet (and yes, a really big truck). For those of you who could not make it this year, here are some of the most important new themes AWS emphasized through announcements at re:Invent — and our engineers’ reactions: 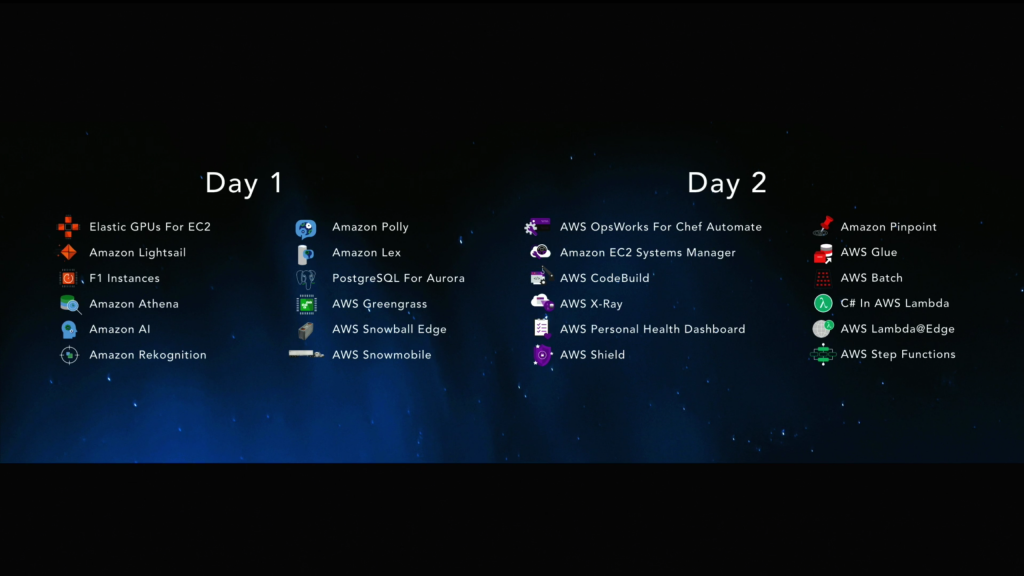 In the Wednesday keynote, Andy Jassy announced more varieties of compute instances — something he has done at every re:Invent, but nonetheless is always a powerful display of AWS’s market dominance and depth of services. Jassy announced:

2. Power to the Platform

If there is any core message to take out of re:Invent, it is that AWS is not content to be “just” an IaaS provider. Jassy, customers, and new announcements all emphasized the value of AWS’s managed tools, like Aurora, Simple Server Management (see below) and perhaps the most important service for the wider technology audience: Lightsail.

AWS Lightsail allows developers to launch virtual private servers (VPS) that start at $5/month. No need to provision storage, set up security, or do any custom fine-tuning, meaning Lightsail is targeted towards start-ups or standalone websites, not large enterprises. It is hard not to mention this service without saying that it is obviously a direct threat to Digital Ocean, which offers a similar service at the same price point.

Jassy also launched Amazon Athena, a service that allows you to query S3 directly using standard SQL without spinning up clusters of instances. (Again, notice the platform theme.) Our engineers are already drooling over this service for its potential ability to query logs in Config, CloudTrail, and ELB.

In general, the PaaS message is also trying to convince enterprises to move beyond lift-and-shift. Obviously, if you are using AWS’s platform services, you are a stickier customer. But truthfully, the companies that we see with the greatest cost and agility benefits are those that have adopted AWS native services. Companies that really utilize the full breadth of AWS services lower ongoing management costs and reduce the effort of updating and upgrading their own tools. When fear of vendor lock-in keeps companies limited to EC2 and S3, they wind up burning valuable resources retrofitting their own tools and managing 3rd party solutions.

3. Some Big Love for Ops

The glamorous service announcement like analytics will get all the press, but it was great to see Werner focus so heavily on the nuts-and-bolts, distinctly unglamorous work of ongoing systems operations during his Thursday keynote.

These are the kinds of services that our engineers have been asking for — things that make the management of large-scale cloud computing environment easier.

4. IoT to the People

AWS unveiled IoT last year, but this year’s announcement is even more impressive: it is making the engine behind Alexa (Amazon Lex) available to developers along with Polly, a text-to-speech service. The combination of Lex + Polly means developers can easily build “conversational applications” — applications that allow you to book travel in a multi-stage conversation, for example. This is yet another signal that AWS will continue to be the foundation — and technical enabler — for innovation in the next ten years.

As a company that builds and manages thousands of VMs a year, we can confidently say it won’t be long before we are building entire computing environments with voice.

5. Amazon Sees Oracle as its Biggest Competitor (and Easiest Target)

In case you missed it, Jassy’s keynote was repeatedly…”hostile” to Oracle. This coming after the shots fired at Oracle that proclaimed it would beat AWS in the cloud.

Most customers couldn’t care less about this jockeying, but it was interesting that Jassy’s biggest laughs came at the expense of Oracle — and so keep an eye on any new Oracle services as a forecast of Amazon’s next announcements. Jassy announced PostgreSQL support for Aurora, which makes it easier for Oracle customers to migrate to Aurora.

Amazon continues to release services that give you everything you need to create a complete analytics computing environment on AWS. AWS Glue is their new cornerstone analytics service, which does exactly as described — pieces together the various stages of data cataloguing, preparation, and job scheduling to work alongside their existing analytics services like EMR and Redshift. It is a fully managed ETL service that makes it easy to move data between your data stores. No more patching together various cloud-native and non-cloud-native services.

It was widely expected that AWS would release an update to their Elastic Container Service, but the launch of AWS Blox, a collection of open source container management projects for ECS, is definitely an new direction for AWS. The open source container developer community is thriving — and for those who are not aware, Docker itself is open source — so it is very smart for AWS to keep in the tradition. This is one area where AWS knows innovation can happen faster outside of their own offices.

At the end of the day, AWS has proven yet again why they succeed: because they release new services constantly (sometimes even when they are just the kernel of an idea) and iterate on them constantly. It is a message that both Werner and Jassy reiterated throughout their presentations, that the company that succeeds will be the company that responds to customers the fastest. This is no doubt a message everyone has already heard, but to see it carried out in such spectacular fashion by Amazon year after year is still impressive. Now onto the party.

Logicworks is an enterprise cloud automation and managed services provider with 23 years of experience transforming enterprise IT. Contact us to learn more about our managed cloud solutions.